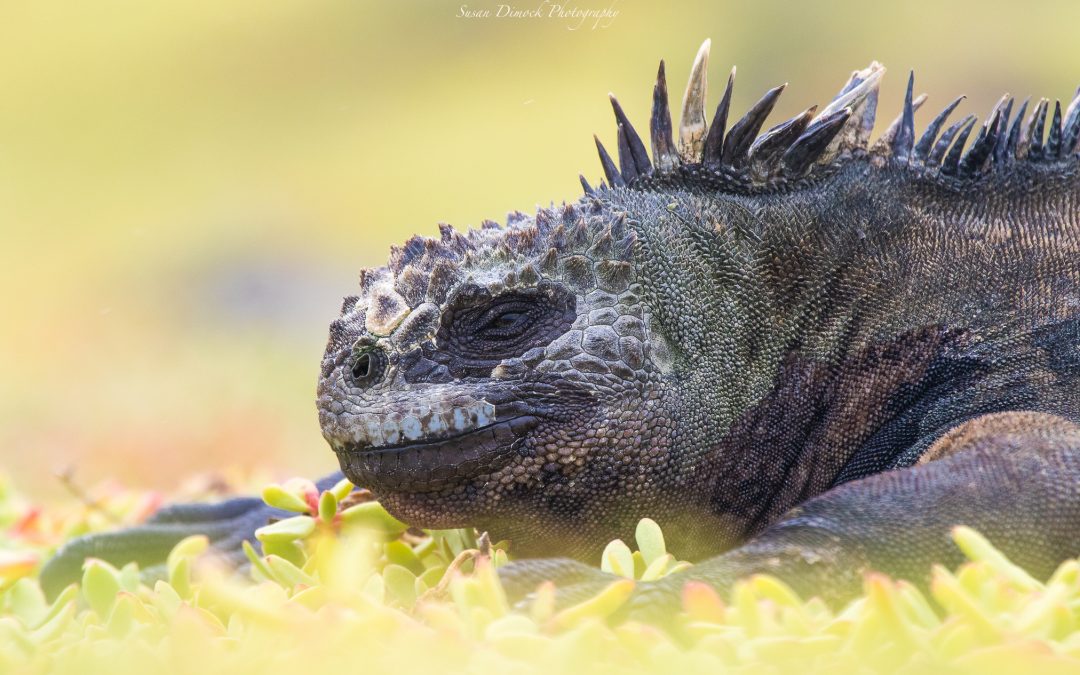 My husband, Steve and I took a snorkeling tour to a beautiful, secluded, white sand beach and everyone really enjoyed being in the water. I had planned to snorkel as well. However, after scanning the environment, I couldn’t help but notice the exquisite photo op of Galapagos marine iguanas surrounded by Sally lightfoot crabs with waves crashing in the background. There was so much to do and see that on a daily basis we were faced with these choices between phenomenal and spectacular!!! It took a lot of patience to get the white foam wave just so and I was thrilled with the result.  I sat amongst these creatures for two hours in awe of their existence.  Like most wildlife of the Galapagos, for the most part they could care less that I was there. To me, it tells one of the incredible wildlife tales of the exotic Galapagos! (Good thing I packed my water shoes…that lava rock is treacherous!)

I developed a new found respect and curiosity about marine iguanas of the Galapagos after viewing this BBC youtube about them.  I watched this prior to our trip which made it really exciting to see them in person.  (Take a peek, you won’t be sorry you did.)

Sally lightfoot crabs have a symbiotic relationship with Galapagos marine iguanas.  They eat skin parasites and dead skin off of the iguanas. So the iguanas get a cleaning and the crab get a meal!  Kinda disgusting but nature is efficient  like that. 🙂

Some say Sally got her name from a Caribbean dancer, others say it is simply from the fact that she can jump, leap and seemingly fly to escape her predators.

Researchers theorize that Galapagos land iguanas and marine iguanas evolved from a common ancestor  since arriving on the islands from South America presumably by rafting. The marine iguana diverged from the land iguana some 8 million years ago, which is older than any of the extant Galapagos islands. It is therefore thought that the ancestral species inhabited parts of the volcanic archipelago that are now submerged. The two species remain mutually fertile in spite of being assigned to distinct genera, and they occasionally hybrids where their ranges overlap. ~ Wikipedia

Above….head shot of my “Princess Iguana”!  Who knew that I would be so enamored by reptiles!

Because fresh water on the islands is scarce, land Iguanas get most of their moisture by eating from the ubiquitous  pear cactus shown in the photo below. They eat the  fruit, flowers, pads, and even the very prickly spines. During rainy season they drink from available standing pools of water and feast on the yellow cactus flowers that are in bloom.

The above Galapagos tortoise is in the wild on Santa Cruz island.  We also visited the Darwin Research Center which is actively striving to educate, preserve and conserve species of the islands. A famous story and icon of conservation for the Galapagos is the story of Lonesome George, a Pinta Island Tortoise of the Galapagos. He was dubbed Lonesome George as he was the last of his species.

Over the decades, all attempts at mating Lonesome George with one of his own had been unsuccessful, due to the lack of females of his species. This prompted researchers at the Darwin Station to offer a $10,000 reward for a suitable mate. In his last years he was known as the rarest creature on the earth. ~ Wikipedia

Efforts remained unsuccessful and George died mateless in June of 2012. There are several species surviving that are partial descendants of Lonesome George.

I loved the exotic, gaudy with wildlife environment of  the Galapagos Islands and will definitely be returning!  Next time during bird season! Thank you for following along! ~ Susan